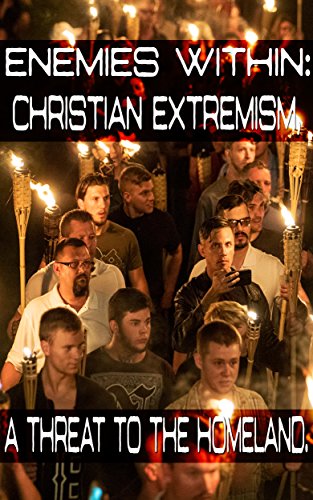 This study has footnotes, bibliography, maps, and list of acronyms. It is from U.S. Army Command and General Staff College and Odessa K. Sam-Kpakra (Major, Army National Guard).

“The primary question of this research will explore why certain individuals on the extreme spectrum of the Christian religious faith are violent. Recent Southern Poverty Law Center (SPLC) numbers indicate violence actually perpetuated and or planned on killing American citizens has occurred by a growing group of extremists that share extreme Christian views, which permeates with hatred and anger. The SPLC further indicates a total of 1,600 extremist groups operate across the country, presenting a clear and imminent threat to the United States.

“Most recently, a group called the Council of Conservative Citizens (CCC) incited the attack on nine African-American members of the African Methodist Episcopal Church in Charleston, South Carolina, by a young 21-year-old derelict named Dylan Roof. The Ku Klux Klan (KKK), one of America’s oldest hate group founded in 1866 to resist the encroachment of African-American rights, remains strong and thrives, especially as a result of the first elected African-American President, Barack H. Obama. Motivated by the Christian extremist beliefs of the KKK, On April 14, 2014, Frazier Glenn Miller carried out a crime that killed three people in a Kansas City suburb, just outside two Jewish businesses. The Army of God (AOG) is a Christian extremist group founded in the early 1980’s. Due to the loosely structured nature of the organization, its exact origin is unknown. What is known however, is the organization’s core belief that abortion is against the will of God and must be stopped by any means necessary, including death. On November 27, 2015, Robert Lewis Dear, entered an abortion clinic in Colorado, killing three and injuring nine others. Mr. Dear, a lone gunman with a profound admiration for the AOG had deep Christian convictions and believed death to be the only solution to ending abortion.

“On November 8, 2015, five were arrested for plotting to begin a race war in rural Virginia. Members of this group were not aware of the fact that the FBI was monitoring their actions. The FBI met with the group several times, posing as firearms dealers. As the group strengthened their plans to execute their quest to start a race war, they attempted to purchase firearms and explosives from undercover agents and were arrested as soon as money changed hands. These individuals were affiliated with the Aryan Nation and Aryan Brotherhood, whose core tenet was “an arm of the Christian identity organization Church of Jesus Christ Christians.” The organization was founded from the teachings of Wesley Swift, a prominent figure for the Christian identity Movement (CIM) in the 1940s.”