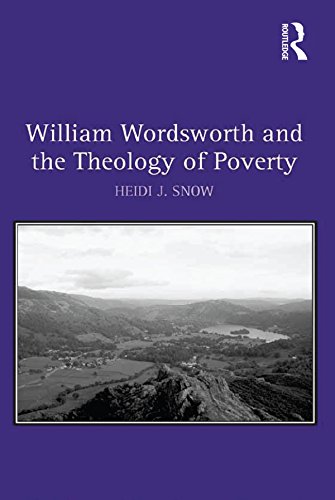 Titulo del libro: William Wordsworth and the Theology of Poverty

Exploring the relationship between poverty and religion in William Wordsworth’s poetry, Heidi J. Snow challenges the traditional view that the poet’s early years were primarily irreligious. She argues that this idea, based on the equation of Christianity with Anglicanism, discounts the richly varied theological landscape of Wordsworth’s youth. Reading Wordsworth’s poetry in the context of the diversity of theological views represented in his milieu, Snow shows that poems like The Excursion reject Anglican orthodoxy in favor of a meld of Quaker, Methodist, and deist theologies. Rather than support a narrative of Wordsworth’s life as a journey from atheism to orthodoxy or even from radicalism to conservatism, therefore, Wordsworth’s body of work consistently makes a case for a sensitive approach to the problem of the poor that relies on a multifaceted theological perspective. To reconstruct the religious context in which Wordsworth wrote in its complexity, Snow makes extensive use of the materials in the record offices of the Lake District and the religious sermons and congregational records for the orthodox Anglican, evangelical Anglican, Methodist, and Quaker congregations. Snow’s depiction of the multiple religious traditions in the Lake District complicates our understanding of Wordsworth’s theological influences and his views on the poor.