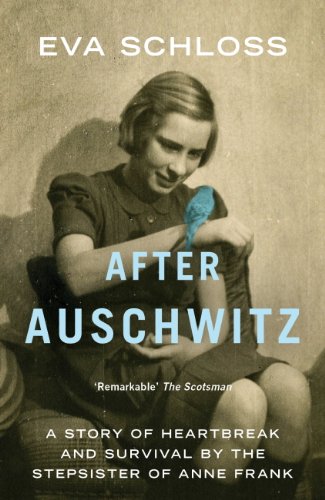 After Auschwitz: A story of heartbreak and survival by the stepsister of Anne Frank (English Edition) por Eva Schloss

Titulo del libro: After Auschwitz: A story of heartbreak and survival by the stepsister of Anne Frank (English Edition)

Eva Schloss con After Auschwitz: A story of heartbreak and survival by the stepsister of Anne Frank (English Edition)

Eva was arrested by the Nazis on her fifteenth birthday and sent to Auschwitz. Her survival depended on endless strokes of luck, her own determination and the love and protection of her mother Fritzi, who was deported with her.

When Auschwitz was liberated, Eva and Fritzi began the long journey home. They searched desperately for Eva's father and brother, from whom they had been separated. The news came some months later. Tragically, both men had been killed.

Before the war, in Amsterdam, Eva had become friendly with a young girl called Anne Frank. Though their fates were very different, Eva's life was set to be entwined with her friend's for ever more, after her mother Fritzi married Anne's father Otto Frank in 1953.

This is a searingly honest account of how an ordinary person survived the Holocaust. Eva's memories and descriptions are heartbreakingly clear, her account brings the horror as close as it can possibly be.

But this is also an exploration of what happened next, of Eva's struggle to live with herself after the war and to continue the work of her step-father Otto, ensuring that the legacy of Anne Frank is never forgotten.