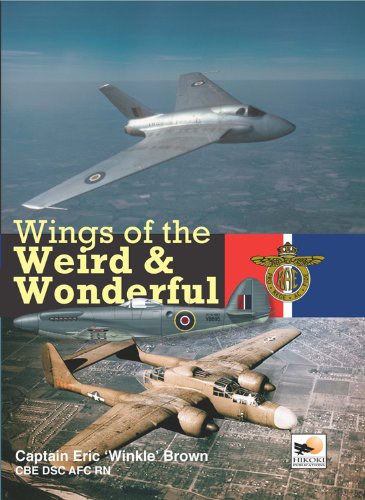 Titulo del libro: Wings of the Weird and Wonderful (Consign)

A test pilots analysis of 53 aircraft types from a pilots perspective from the cockpit.

Review
Eric Brown is one of those names that has passed into myth among aircraft enthusiasts and modellers, and justifiably so as his flying career eventually landed him in the Guinness Book of Records, having flown more different aircraft types - basic types, not including sub-variants - than any other pilot in the world. Brown logged some 490 types in the course of his career, and this book selects fifty-three of them and offers his personal account of each, as recorded in his log book.

Brown's accounts are full and frank, sometimes hair-raising, sometimes amusing, but always informative and of enormous interest to the enthusiast.

While the book is beautifully presented, and lavishly illustrated, it is the selection of aircraft involved that will really make this book of maximum interest. Brown's take on the Bearcat and Tigercat, for instance, that US readers might suppose he had no business concerning himself with. Or the half-scale Short Stirling, the S.29, which many of us will never even have heard of.

Alphabetically laid out, from Avro Lancaster to Winter Zaunk6nig, this is a most enjoyable read, and can be recommended to all. -- Barry Brine - Scale Aviation Modeller - December 2010

By the legendary Captain Eric 'Winkle' Brown, CVBE DSC AFC RN. If that title sounds familiar then do not be surprised as it was originally published in 1977 by Macdonald and Janes and later by Airlife. The good news is twofold firstly, Eric is very much alive and well just down the road from this reviewer in Copthome, West Sussex and, in his nineties, very active still on the international lecture circuit. Secondly, Eric has greatly expanded the original book so that coverage has now been increased from 17 types to no less than 33, ranging alphabetically from the Arado Ar 232B multi-wheeled transport ("a strange beast with a sound functional purpose") to the Siebel Si 204D utility aeroplane ("excellent utilitarian aircraft with a splendidly practical cockpit layout"). In between come a range of Blohm & Voss types, Biickers, Dorniers, Fieselers, Focke-Wulfs, Heinkels, Henschels, Junkers and Messerschmitts that include a number ofseaplanes and floatplanes - the BV 138 and the massive six-engined BV 222, the Do 18 and the Do 24. As part ofa career that involved flying no less than 487 ba ·c aircraft types (including the Catalina!) and making 2,407 aircraft carrier landings, Eric served at the A&AEE and as Chief Naval Test Pilot at the RAE, the latter including command of the Enemy Aircraft Flight. During this phase of his career, he test flew and evaluated no less than 55 Luftwaffe types - a challenging and potentially dangerous occupation!

In this latest book, beneficiary ofexpansion and a face lift by my friend Elwyn Blacker's Blacker Design, Captain Brown summarises his impressions of flying these enemy types, the text being supported by photographs, cutaway drawings and cockpit views and a number of colour side view drawings. This is an essential title for any serious aviation library and perhaps we can dare to hope for similarly expanded and redesigned Wings of the Weird and Wonderful and Testing for Combat by the same distinguished author. -- David Legg - Catalina News Oct 2010

Eric Brown is famous for having flown 487 different types of aircraft, a greater number than any other pilot, and Crecy has recently published two of his finest works in print - Wings of the Luftwaffe (see page 78) and this, the latest from his prolific pen. In fact, like the former, Wings of the Weird & Wonderful is an amalgamation of two separate volumes published in 1983 and 1985, the combined content of which has been expanded to cover 53 different types. The book is a superb compilation of Eric Brown's experiences encapsulated through a narrative style that reminds one of the jottings made by test pilots in adjuncts to their logbook entries. Which all makes for compulsive reading.

'Winkle' (a nickname applied by the Navy) became the first naval officer to serve as chief test pilot of the elite Aerodynamics Flight at RAE, Farnborough, where he assessed aircraft from the USA, Germany and several other countries in addition to those produced in Britain. The immediate aftermath of the Second World War brought a profusion of types to test that is unlikely ever to be repeated and Eric Brown has done well to devote so much time to recording this activity and to making public his thoughts on the handling qualities of so many different types.

When it comes to preferences, Eric is more than circumspect, but one cannot help feeling that his choice of 'the best' is split between two very different types: the Avro Lancaster and the Winter Zaunkonig, that just happen to alphabetically flank the rest. For the reasons why, read the book. --Aviation News February 2011

Wings of the Weird & Wonderful, an update of the original two volumes with the same name released in the 1980s by original publisher Airlife. The content has been redesigned and expanded and now features a total of 53 of the 490 different basic types that Eric Brown has flown. Indeed at the front of the book can be found a list of all those 490 types and they include the Catalina although our favourite flying boat is not one of the aircraft covered in the body of the book. In fact, marine craft coverage in the book is restricted to the Saunders-Roe SR.A/1 jet-powered flying boat, an example of which is now preserved in the Solent Sky collection in Southampton. Appearance and concept-wise, it would be tempting to assume that this aircraft would come under the `weird' category although Eric Brown's description of it as a "unique aircraft of unexpected quality" might suggest that he felt `wonderful' was more appropriate. The fact remains that he nearly lost his life in the third example TG271 when a large piece of timber got in the way of the landing run upon Cowes Roads causing the jet to cart-wheel and continue along the water inverted. The full story is in the book of course. Elsewhere, there are detailed air test descriptions of such diverse types as the Avro Lancaster, Bell Kingcobra, Fairey Spearfish, Gloster Gauntlet, Horten IV tailless sailplane, Northrop Black Widow, the half-scale Stirling bomber and the very unorthodox Miles M.39B Libellula tandem wing aircraft, the latter certainly deserving of the description `weird'! A terrific book by this most well-known and literate airman, it is great to have it in new and expanded format. --Catalina News 2011