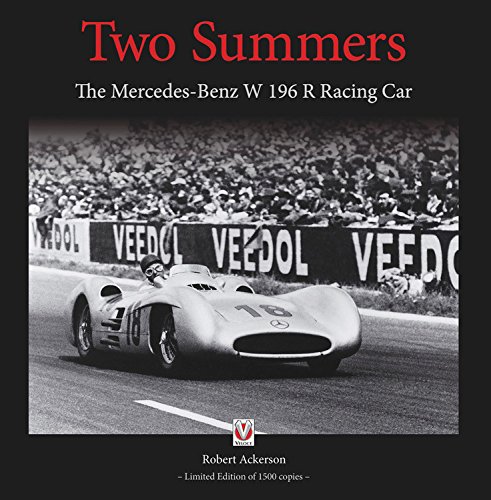 Two Summers offers a fresh, revealing and highly personal look at the culture of Grand Prix racing as it was during the 1954 and 1955 championships, with individual portraits of the twelve races in which the Mercedes-Benz W 196 R participated. This book explores the Mercedes-Benz W 196 R's historic roots, development, and its place in Grand Prix racing, detailing its triumphs, struggles and disappointments, as well as the spirited challenges from Maserati, Ferrari, Gordini and Lancia.With carefully crafted observations and conclusions, given added drama by richly detailed illustrations, this book captures the energy and dynamic nature of these racing seasons, and shows that Juan Fangio was indeed the ultimate master of the art and science of racing a Grand Prix automobile; the W 196 R the instrument with which he honed his skills. This book captures the decisive moments when victory - hanging in the balance - tilted in Fangio's favor, due to his iron discipline, and steady hand on the wheel.The W 196 R's racing days may be long gone, but the car remains a shining star of Mercedes-Benz' participation in motor sport heritage events worldwide. It is this timeless appeal of the W 196 R that gives Two Summers its vitality, charm and enduring attraction.

Review
There is much to enjoy in the text, but the beauty of this book is in the glorious pictures --Motor Sport

There can [...] be no doubt about the quality of this highly enjoyable book, with compelling words that will keep the reader entertained from cover to cover and an excellent choice of photographs from the best sources for images of Mercedes-Benz history. Readers of The Bulletin are going to have real difficulty deciding where to spend their Christmas present book tokens this year but 'Two Summers' will surely be near the top of the pile! --VSCC Bulletin

The core of the book is devoted to individual portraits of the twelve races that comprised the 1954-55 seasons in which the Mercedes W196 R participated. With its carefully crafted observations and conclusions, and added drama of richly detailed illustrations, this book captures the energy and dynamic nature of these racing seasons --Mercedes Owner


Like so many teenagers coming of automotive age in the mid-fifties, Robert Ackerson was drawn to fast-moving and exciting automobiles. These were usually found just a few miles north of his home in New City, New York, on Saturday nights at the stock car races at Middletown, NY. These interests have continued throughout his life and work. His extensive automotive library, his life-long study of Mercedes-Benz history and his careful study and selection of material from the Daimler Archives make Two Summers an exciting book, celebrating the ever-young Mercedes-Benz W 196 R. Robert Ackerson has written numerous books and articles about many of the world s greatest high-performance cars. His books include Return to Glory! The Mercedes 300 SL Racing Car, Jeep CJ 1945-1986 and Jeep Wrangler from 1987, Ford F-150 Pickup 1997 to 2005, Chrysler 300 Series - Pedigree, Power and Performance since 1955, and Chrysler PT Cruiser. He has received recognition for the quality of his writings from the Society of Automotive Historians and the Antique Car Club of America.  Robert lives in Schenevus, NY, and is a full time author.