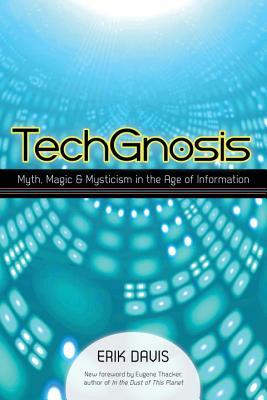 Titulo del libro: TechGnosis: Myth, Magic, and Mysticism in the Age of Information

The gap between the technological mentality and the mystical outlook may not be as great as it seems. Erik Davis looks at modern information technology--and much previous technology--to reveal how much of it has roots in spiritual attitudes. Furthermore, he explores how those who embrace each new technological advance often do so with designs and expectations stemming from religious sensibilities. In doing so, Davis both compares and contrasts the scientific attitude that we can know reality technologically and the Gnostic idea of developing ultimate understanding. Although organized into reasonable chapters, there's a strong stream-of-consciousness component to Davis's writing. His expositions may run, for example, from information theory to the nebulous nature of Gnosticism to the philosophical problem of evil-­all in just a few pages. It's as if there are so many connections to make that Davis's prose has to run back and forth across time and space drawing the lines. But the result, rather than being chaotic, is a lively interplay of wide-ranging ideas. His style is equally lively and generally engaging--if sometimes straying into the hip. In the end, he succeeds in showing the spiritual side of what some may see as cold, technological thought. --Elizabeth Lewis