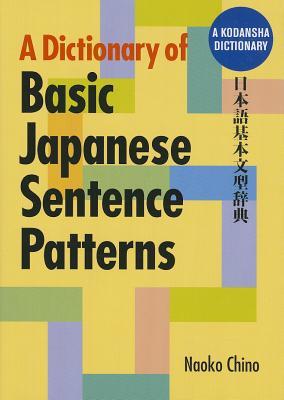 A Dictionary of Basic Japanese Sentence Patterns is a fundamental learning tool for all students of the Japanese language, whether they be unblemished beginners or scarred veterans. With both types of struggling student, as well as for all the gradations that fall in between, there is a strong tendency, in the heat of battle, to lose sight of the essential nature of the Japanese sentence. It is for just such people that this dictionary has been created, to help them keep their eyes fixed firmly on the target and not be led astray.

The dictionary contains fifty of the most fundamental Japanese sentence patterns as well as sixty-nine variations. This number covers all the patterns that are needed for levels 3 and 4 of the Japanese Language Proficiency Test. Each pattern and variation is clearly defined by a formula given in Japanese, romanization, and English. Each is exemplified by sample sentences (both in single sentences and in dialogues), and each is represented in both polite and informal usage.

By means of this approach, the essential nature of the Japanese sentence is clarified, and once that has been done, the many patterns and variations fall easily into place. The simple, undisguised truth is that there are only three types of sentence in Japanese, and all of the convolutions and complications that distract and bemuse the student are nothing more than modifications of these three fundamental types. The study of the Japanese sentence need not be as difficult as it is seems.

A Dictionary of Basic Japanese Sentence Patterns may be used as a reference book to look up individual patterns for the purpose of learning, confirming, or reapproaching them, or it may be used as a textbook to be read from beginning to end, providing an overview of the Japanese sentence while buttressing the student's grasp of individual patterns.

Naoko Chino, the author of the best-selling All about Particles and Japanese Verbs at a Glance, has again presented one of the more forbidding aspects of the language in a way that is both approachable and eminently comprehensible.