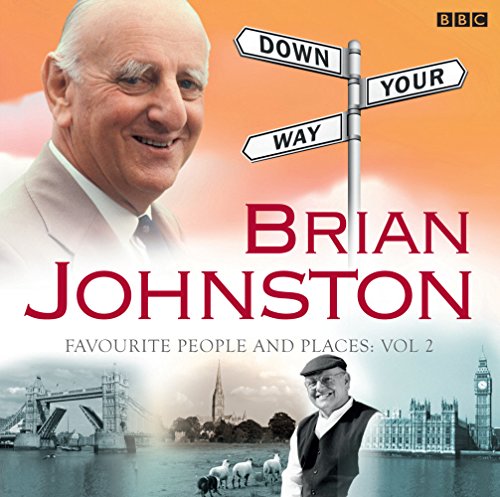 Reseña del editor Down Your Way was one of the most popular programmes on BBC Radio from 1946 until 1992. Every week the presenter would visit a different city, town or village in the UK and interview six local people about its history, traditions and customs. Brian Johnston presented the series for fifteen years and for this recording, his son Barry has selected more of the fascinating people and places that his father visited on his travels. Brian meets famous people such as the former England footballer Nat Lofthouse, Australian cricket legend Sir Donald Bradman, and steeplejack and TV personality Fred Dibnah, as well as marvellous local characters, including the British snuff champion, a lady gurning champion, and a Scottish sheep shearer. He also takes a boat trip down the River Thames, visits Tower Bridge and Abbey Road studios, and goes to Salisbury Cathedral and Wigan Pier. This delightful recording illustrates the rich and colourful heritage of the people and places of Great Britain.1 CD. 1 hr 12 mins. Biografía del autor Brian Johnston was born in 1912. He joined the BBC's Outside Broadcasts Department immediately after the war and worked first on live radio broadcasts from theatres and music-halls all over Great Britain. He was one of the first broadcasters to work for both television and radio and began his long association with cricket commentary in the summer of 1946. Between 1948 and 1952 he also presented the live feature 'Let's Go Somewhere' for the popular Saturday night programme In Town Tonight. He became the BBC's first Cricket Correspondent in 1963 and held this post until his retirement in 1972, after which he continued as a regular member of the Test Match Special team. He took over presenting Down Your Way from Franklin Engelmann in 1972 and continued for fifteen years. He published two autobiographies and fourteen other books, including Now Here's a Funny Thing, It's Been a Piece of Cake and Someone Who Was. He died in January 1994.