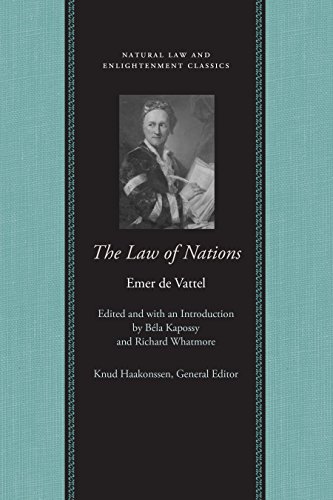 The Law of Nations: Or Principles of the Law of Nature Applied to the Conduct of Nations and Sovereigns (Natural Law and Enlightenment Classics) por Emer de Vattel

Titulo del libro: The Law of Nations: Or Principles of the Law of Nature Applied to the Conduct of Nations and Sovereigns (Natural Law and Enlightenment Classics)

Emer de Vattel con The Law of Nations: Or Principles of the Law of Nature Applied to the Conduct of Nations and Sovereigns (Natural Law and Enlightenment Classics)

Críticas . . . A beautiful book with and without the cover, it has generous margins, a ribbon page marker that harmonizes with the cover, and sells for only [$24.00]. The Law of Nations was a monumental contribution to international law and to political economy. Vattel developed a theory of the cultural, political, and economic conditions necessary for a viable system of international justice, and his principles of how civilized nations should conduct themselves toward other nations and their citizens provide essential contextualization for eighteenth-century thought. The decision to reprint the 1797 translation rather than provide a new one might be questioned, but it reads well, retains the section numbers and guides in the margins, has several kinds of notes as well as translations of Vattel's Latin citations, and stands up well to the new translations of three of Vattel's essays that are included in the volume. The 1797 prose is true to Vattel's highly reasoning and reasonable style and displays the best features of polished eighteenth-century prose. Studies in English LiteratureSummer 2009This is an English translation of Emer de Vattel's hugely influential 1758 work Droit des gens. Vattel systematically derived principles of international law from natural law and also synthesized the modern discourse of natural jurisprudence with the language of political economy. . . . The volume also contains biographical sketches of authors referred to by Vattel and bibliographies of works referred to by Vattel and writings on Vattel.Reference & Research Book News August 2008 What makes up the basis of what's called an honorable practice in today's world? The Law of Nations is a new and updated edition of Emer de Vattel's classic writing from over two hundred years ago. Despite its age, its wisdom holds true even today, touching on how nations ought to act when dealing with one another in order to promote peace and prosperity. Enhanced with an index and many informative appendixes, The Law of Nations is a top pick for anyone who would educate themselves with this international judicial studies classic from the Enlightenment period.The Midwest Book ReviewAugust 2008 Reseña del editor The great eighteenth-century theorist of international law Emer de Vattel (1714?1767) was a key figure in sustaining the practical and theoretical influence of natural jurisprudence through the Revolutionary and Napoleonic eras. Coming toward the end of the period when the discourse of natural law was dominant in European political theory, Vattels contribution is cited as a major source of contemporary wisdom on questions of international law in the American Revolution and even by opponents of revolution, such as Cardinal Consalvi, at the Congress of Vienna of 1815. Vattel broadly accepted the early-modern natural law theorists from Grotius onward but placed himself in the tradition of Leibniz and Christian Wolff. This becomes particularly clear in two valuable early essays that have never before been translated and are included in the present volume. On this philosophical basis he established what the proper relationship should be between natural law as it is applied to individuals and natural law as it is applied to states. The significance of The Law of Nations resides in its distillation from natural law of an apt model for international conduct of state affairs that carried conviction in both the Old Regime and the new political order of 1789?1815. The Liberty Fund edition is based on the anonymous English translation of 1797, which includes Vattels notes for the second French edition (posthumous, 1773). Emer de Vattel (1714?1767) was a Swiss philosopher and jurist in the service of Saxony. Béla Kapossy is Professeur Suppléant of History at the University of Lausanne. Richard Whatmore is a Reader in Intellectual History at the University of Sussex. Knud Haakonssen is Professor of Intellectual History at the University of Sussex, England.